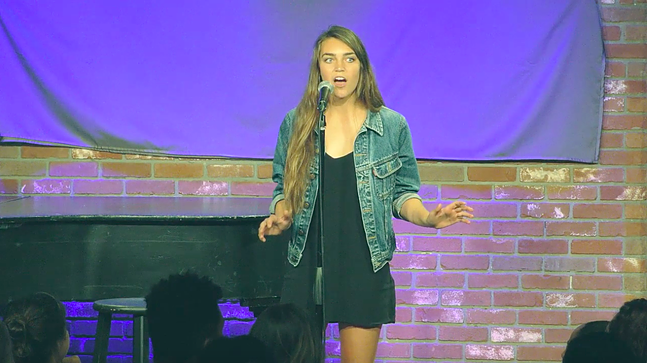 About six months after graduating from Chapman University with a degree in public relations, I was living in L.A. pursuing acting. I was very ill and couldn’t figure out why, so it made keeping even a job as a hostess a struggle. One night I mustered the energy to go to my friend’s stand up comedy show and I fell in love with the idea of telling funny stories in dimly lit rooms to groups of both strangers and friends. I decided to take a stand up class. That class required me to participate in a show, and the rest, as they say, is history.

In the stand up class we practiced telling stories about ourselves, and the rest of the class gave us feedback on what was funny or not. It turned out that the funniest things about people are those that are most relatable and make us most vulnerable. I hadn’t had a period for two years due to this mysterious illness, and I was surprised at how interesting this was to others. So, I created my first stand up routine surrounding this painful experience of not getting my period. Sharing that story on stage was the most “in flow” I have been, possibly ever.

As it turns out, I got my period the day before my stand up comedy debut. This was great because I was so hormonal it distracted me from being afraid. The show was a success and hearing the laughter and support from the audience was a feeling that I will always cherish. It was a “coming clean” epiphany for me, in so many ways. Many friends and family — who I have known my entire life — tell me they feel like they didn’t know me before, not like they do now. As for now, I am still performing at occasional stand up shows, but mostly I’m focusing on acting classes and writing a TV pilot with one of my best friends. It was scary to follow my dreams, but I wouldn’t have it any other way. Every day I remind myself to put fear in the back seat, and to take it one stage at a time.

One thought on “Standing Up”