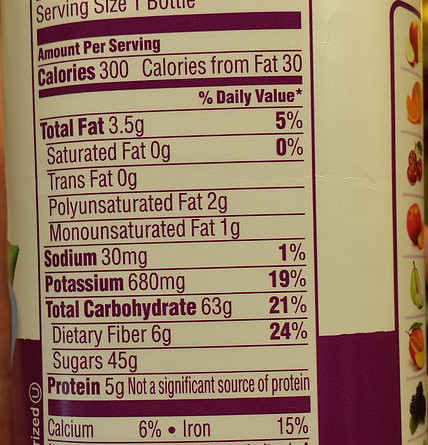 The next time you pick up a fruit juice or “healthy” drink at the store, check the label for grams of sugar. There will be a number, and then follow the line to the column for percentage of suggested daily intake. Nothing?

That’s on purpose. And likely because the figure would be terrifyingly over what the U.S. Food and Drug Administration would allot for someone’s suggested consumption of sugar.

The American Heart Association recommends 6 teaspoons of sugar per day for women and 9 for men. Now look at that label again. One teaspoon equals four grams of sugar. So, if that Yerba Mate mint tea you’re drinking has 28 grams of sugar, as a female you’ve already exceeded your suggested daily intake with one drink.

Why is this a problem?

Because when the body is overloaded by sugar, it can’t process it all and turns it into fat. Day after day, this starts to pile up and voila: the United States has an obesity epidemic of catastrophic proportions. Heart disease is the No. 1 cause of death in the United States.

“Fed Up” is a documentary by Stephanie Soechtig that addresses this issue. It’s an eye-opening look at the government’s role in this story that likens food manufacturers and lobbyists who hawk sugar products (found in 80 percent of the food in a supermarket) to the blatant disregard for people’s health demonstrated by big tobacco companies before they were prosecuted in the ‘90s.

At the end of “Fed Up,” filmmakers challenge the audience to a 10-day sugar challenge and I accepted. I went sugar-free for 10 days with a few friends, and lived through it to write about it.

In fact, it wasn’t that bad. I allowed myself natural sugars found in fruits, but stayed away from anything processed. This essentially means that when on a sugar-free meal plan, you end up cooking most of your food at home. Eating out was a pain, and I was definitely “that girl” that requested the ingredients from servers and had to opt out of eating at a few social gatherings because I didn’t know what was in the food.

Coffee was sort of gross without sugar, and I switched to black tea. I certainly craved dessert after dinner, or that mid-day nibble of chocolate. I probably ate more fresh-ground peanut butter than I should have, but had to get some protein and energy from somewhere given I don’t eat meat.

Honestly, the two hardest moments were going to the movies and not snacking on candy and crashing on a long run because a banana just doesn’t provide intravenous energy the way a Clif shot does.

Other than that, for someone who cooks at home a lot anyway, it wasn’t a giant adjustment. And that’s not said to pat myself on the back, but to highlight the major point of “Fed Up” in the first place: We probably all eat too much sugar, but the real victims here are low-income families and neighborhoods that believe the only affordable way to eat is by consuming processed and fast food. Fifty percent of U.S. school districts have contracts with fast-food chains for their school lunches. Aspen grows a lot of its own and makes it fresh onsite daily.

I think the most eye-opening part of the short and not-so-sweet challenge was just how much sugar is in everything we consume. Odwalla protein drinks: 44 grams. Tortilla chips: 3 to 4 grams per serving. Tomato paste: 2 grams. It doesn’t have to be dessert to have sugar, and moving forward that’s something to which I’ll certainly be more aware.

Giving it up? No way. I had a cappuccino shortly after the challenge and added a little sugar and it tasted damn good.

Christine Benedetti is the special sections editor for the Aspen Daily News and the marketing director for the Aspen Historical Society. She writes for a number of publications and puts out the popular “Peaks and Valleys” blog. She has a B.A. in journalism from the University of Washington, and still loves the rain.

One thought on “The Not-So-Sweet Side of Sugar”