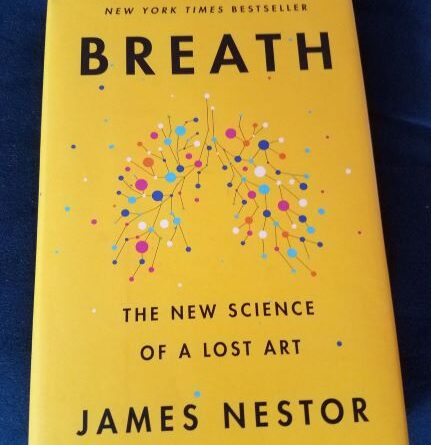 My sister recommended the book Breath, by James Nestor, to me. “Ugh,” I thought to myself. “Non-fiction puts me to sleep faster than a Tylenol PM.” My sister, who works for the EPA and never has to take anything to fall asleep, knows me well, so she sent me a copy and started putting the pressure on to read this book. She also sent one to our other sister, who works in public health emergency preparedness— I can’t even remember the acronym for her department. My over-achieving little sisters both work for the government and have kids. Meanwhile, I’m fifty and I just broke a tooth. I have my good days too, but what the hell.

Anyway, I read it. And let me just tell you, Breath is a life changing book about the value of breathing through the nose instead of the mouth. We all have our established routines to keep us healthy and fit, cute little mouth-breathers that we are, but this incredible book delves into the amazing list of long-lost health benefits to breathing through our noses. Knowledge that apparently, many experts in their fields have known for centuries, but keeps getting buried under the deluge of ‘progressive’ cure-based research and development options available at our fancy new health clinics.

Native Americans have always taught their young to breathe through the nose; stories of mothers pinching babies’ mouths closed while they sleep and young kids running relay races, then forced to spit at the end in order to prove they held water in their mouths the whole time they were running. Go ahead— try it! Humans have had access to this knowledge since the very beginning. However, in today’s hyper-dosed healthcare system there is no mention of breathing through the nose because whatever ails you, there’s a pill for that.

Breathing through the nose benefits the whole body, including— and especially the mouth. But what would happen to the billion-dollar orthodontics industry in this country if children stopped needing braces? We need to shift our focus from fixing health problems to preventing them in the first place. While writing this book, James Nestor practiced what he preached and personally participated in an experiment where he could only breathe through his nose. The practice cured him of respiratory problems he had had his whole life.

He also researched incredible stories of yogis surviving extraordinary conditions by mastering their own breath. My favorite is the story of Alexandra David-Néel.

Fast-forward to the early 1900s, when a Belgian-French anarchist and former opera singer was making her way up to Tibet with soot on her face, yak fur woven into her hair, and a red belt around her head. Her name was Alexandra David-Néel, and she was in her mid-40s traveling alone through India— unheard-of at the time for a Western woman.

David-Néel had spent most of her life exploring different philosophies and religions. As a teenager, she’d hung out with mystics, starved herself, beaten herself, and followed diets used by ascetic saints. She was into Freemasonry and feminism and free love. But it was Buddhism that really fascinated her. She taught herself Sanskrit, then set out on a spiritual pilgrimage through India and Tibet that lasted 14 years. Along the way she happened into a cave high in the Himalayas, just as Naropa had done. It was there that a Tibetan holy man passed down the instructions for the superheating power of Tummo.

“[Tummo was] but a way devised by the Thibetan hermits of enabling themselves to live without endangering their health on the high hills,” wrote David-Néel. “It has nothing to do with religion, and so it can be used for ordinary purposes without lack of reverence.” David-Néel would rely on the practice over and over again to keep happy, healthy, and heated as she hiked 19 hours a day in freezing temperatures without food or water, at elevations above 18,000 feet.

Yeah. That’s what I’m talking about. That’s the kind of knowledge that takes my breath away and we should not let it disappear again, beneath the surface of our collected awareness.