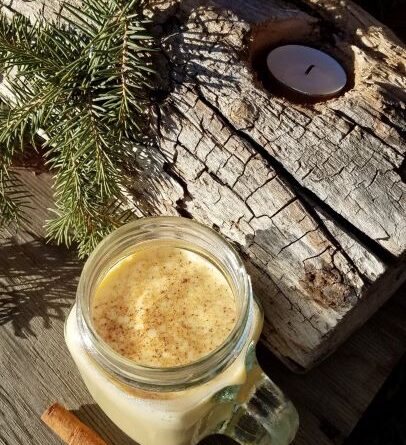 Made from wholesome ingredients, this traditional homemade eggnog recipe from mommypotamus is smooth, creamy, perfectly spiced, and so easy to make.

Raw eggs are optional in this recipe. They can increase the risk of foodborne illness. Older adults, pregnant women, infants, and immuno-compromised people should avoid eating raw eggs or foods that contain raw eggs.

Notes on Adding Rum or Bourbon

You can add rum or bourbon to taste, or if you’re interested in using alcohol to increase the eggnog’s safety profile you can adapt this method described by Cook’s Illustrated.

It tastes pretty strong, so when I made it with this method I ended up diluting the final product just before serving with a little more cream, maple syrup and nutmeg to taste.

In the Cook’s Illustrated version,  the egg/liquor mixture is aged for three weeks to mellow out the flavor and give the alcohol time to do its job. However, in a similar experiment done by a microbiologist at the Rockefeller lab, only 24 hours were needed.