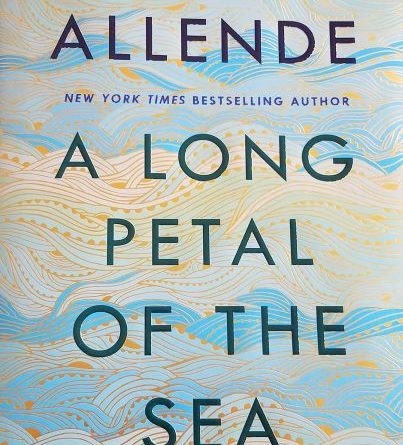 In A Long Petal of the Sea, Isabel Allende takes us through a lifetime of war and oppression, lust and love, blending fictional characters with actual historical figures and events.

Beginning in 1938, during the Spanish Civil War, we meet Victor Dalmau, a doctor, and his family, including Roser, the pregnant widow of his brother who died at the Battle of the Ebro. Victor and Roser are forced to flee their home and make the treacherous climb over the mountains to the border of France. Separated along the way, they reconnect in France and decide they must marry in order to make the journey to Chile on board the SS Winnipeg. The ship made only one trip, chartered by Pablo Neruda, the poet. His mission, to bring new citizens to Chile who would make myriad contributions to his homeland.

Once settled in Chile as a married couple with their son, Marcel, (actually Victor’s nephew) the couple builds a beautiful life together and eventually they come to consider Chile their home, leaving their memories of Spain behind them. Over the course of their lifetime, they each have relationships with others, but at the same time they grow to love one another as soul mates. Isabel explores the nuances of love; love for a brother turned husband, and love between classes.

Victor has an affair with a woman he will never be able to marry, due to her family’s social standing, and the encounter— though brief, produces his only biological offspring. Stolen before her mother even knows of her existence, the baby is sold to adoptive parents by the family’s entrusted priest. A story told all too often through history; young women hidden away while pregnant only to have their children taken from them at birth in the name of “discretion” and “decency” as determined by the patriarchal Catholic church.

A Long Petal of the Sea is an endearing saga about the eternal power struggle that wages on… A story about surviving the cycle of tyranny and independence that has been the human experience since the beginning of time and finding a love that survives as well. Covering the span of a full lifetime, Isabel Allende does a good job of combining fiction with history to show us the beautiful tragedy that is life as we know it.