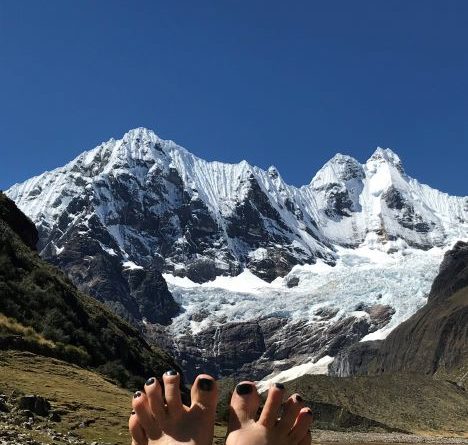 The anticipation of my pedicure appointment, even though I hadn’t made it yet, was a delicious thought that kept me moving. My achy feet being soaked, scrubbed, moisturized, rubbed and finally my toenails painted a sparkly dark blue, reminiscent of the skies above Mount Sopris. I planned it out, relishing every exquisite detail, as I trudged forward.

I woke that morning with a ping in my stomach, feeling like I had missed something. I rolled over as the momentary anxiety seeped away, my husband sound asleep beside me. Outside, the horizon was barely discernible, gray on gray. My retirement from teaching was fresh. There was nothing on my calendar; nothing pressing, no one needed me. The day was wide open. I filled my lungs, stretched my body and contemplated the possibilities.

Soon after, I scuttled downstairs and filled my backpack with two full quarts of water, food, raingear, hiking poles and a small first aid kit (still in there from the last trip.) I snuck back into our bedroom to find my wool socks.

“What are you doing?” his voice scratchy, heavy with sleep.

“I decided to hike Sopris. I should be home by dinner.”

I left the question unanswered and closed the door behind me.

The sun was still below the horizon as I struck out that September morning. The shadows were long as the sun reached over the horizon, lighting the fiery aspen leaves. Sounds of the forest urged me on: chickadees, squirrels, the distant call of a jay. A streak of red rustled through the underbrush. From the top of the hill a fox looked back, made eye contact and disappeared with a flick of its white tipped tail.

Past Thomas Lakes, a zigzag trail led me up through the trees. A grouse fluttered up, startling us both. I continued to click off the landmarks from my memory: the overlook, tree line and the loose scree slope with just a hope of a trail. My memory did not include the long distances between these landmarks, longer than I remembered.

Once on the scree, my foot placement was light, careful, edgy in the thin air. A rock slipped, and my ankle with it, but a light step saved me from a painful twist. Being alone, I was especially careful. Once on the ridge, I picked my way over the false summit, behind another, and climbed up the final pitch. A high school teacher led a few hardy students down, returning from the peak with an accomplished gait. The trail appeared and disappeared and lead me to the top where I found a rough half-moon shelter created out of rocks to block the wind. A few ravens circled overhead as I pulled out my lunch. Alone. I snapped a selfie and sent it to my husband.

As I began my descent, a mountain runner jogged up a neighboring slope, intent on his task. I continued down with my hiking poles clicking until I reached the steep scree section. Concentrating, I descended carefully finding a path even though there was no trail. The footing was loose, unpredictable, unstable. The mountain runner passed me on his return, lightly hopping down the slope.

“I think this section is getting harder every time I come up here.” He confessed.

As he disappeared down the ridge I was left, the last person on the mountain that day. I continued my descent, passed the lakes, and checked the time. The sun was dropping westward. My feet and legs were getting heavy and my lower back was pinched. My mind was narrowing, eventually to a pinpoint of focus with a single goal, descend the last mile to the waiting car. The sounds of the forest were gone, the expansive views remained in the periphery of my vision and I kept walking. Walking was all there was.

And then I began dreaming; dreaming of a pedicure.

I would make an appointment for the next day. While sitting in the massage chair and looking at trendy magazines, my feet would get soaked, scrubbed, moisturized, rubbed and finally my toenails painted a sparkly dark blue, reminiscent of the skies above Mount Sopris. Those imagined shiny toenails were a beacon of hope.

When did an indulgent luxury turn into a necessity?

As a middle-aged woman, Julie Wille is in the midst of another growth spurt. Having wrapped up her career in teaching, she is now exploring possibilities and saying “Yes” more often.