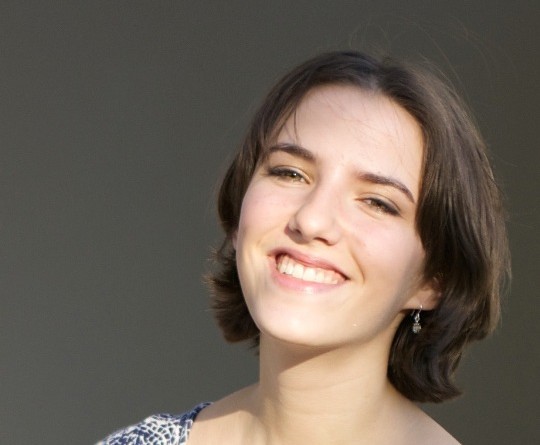 “Sometimes, when someone can’t think of a topic they’d want to write about, it means that there’s one topic they really want to talk about, and aren’t sure they can.” This quote wasn’t directed at me, but when I overheard my journalism teacher telling it to a reluctant student, I knew it applied perfectly to what I’d been struggling with.

Ever since I’d learned that as a valedictorian I would be giving a speech at graduation, I’d struggled to come up with a topic, but to no avail. I’d cycled through hundreds of inspirational messages– Reach for the stars! Don’t be afraid of mistakes! Cherish the memories you’ve made! – but none of them fit. None of them seemed like my message, the one I wanted to give to my class as we moved into this new part of our lives. But when I heard my teacher, I knew instantly that what she said was true for me. There was a message I cared deeply about, and it was connected to me very personally. I just wasn’t sure I would be able to share it.

But, the more I thought about it, the more the idea grabbed hold of me. This was my speech, I felt; this was what I had to share. Even when some days the idea of sharing such an intimate part of me made me want to curl up inside myself, I clung to the idea, to the commitment I’d felt to it ever since I’d thought of it. I was still clinging to it, if a little short of breath, when I was called up to the podium on May 30th to deliver my speech.

“I began my high school career with one of my less wise decisions,” I started. “To volunteer, during an all-school assembly, for what I had been told was a spelling bee. I was told wrong. It was a dance off.

It lasted only two minutes, but believe me, it was a looooong two minutes, filled with pumping bass, intimidating dancing upper classmen, and me — being a sort of stiff deer in the headlights, and kind of bouncing up and down like that could count for the dancing part.

Still, it eventually came to an end, and I scrambled back up to my seat on the bleachers, and by the next day I had pretty much stopped blushing every time I thought of it, and conversations had moved on to other topics, and I thought, Okay, so this is high school, it’s not too bad, I can do this thing.

I’ve learned so much here, about literature, about calculus, about physics, and more general things, like work ethic, study skills — I’ve learned a lot here. It’s been a good four years.

But, I could have made it more.

We often hear about high school as a blank page, a time you can start over.

But, I came to this school with a label I’d brought from middle school, a sort of ‘brand name,” if you will. EMILY BRUELL. It’s kind of a quiet brand, the kind of brand who takes a ton of A.P. classes, and who wins spelling bees, not dance competitions. The selling point of the brand is that it’s smart, although users may experience side effects such as over quietness, spending too much time stressing over tests and grades, and behavior frequently classified as nerd-like.

But, the thing about labels is that even with serious side effects, they’re always there. They’re secure. It’s like you have this ready-made identity that you can just step into, and you don’t have to worry about who you are. And so the more I experienced these side effects, the more I clung to this brand of SMART GIRL. I even have it, here, a little prop.”

I reached into a folder I’d brought up to the stage with me and pulled out a sign I’d printed out earlier, with the word “SMART” typed on it in large block lettering. I propped it up and continued with my speech:

“I worked to fulfill it, studying, working diligently on every perfectionist detail of my homework. And, I don’t regret trying so hard in school. It’s given me a good work ethic. It’s gotten me places, like Bates College, that I couldn’t have gotten without working so hard. But, I also made school my identity. I made SMART GIRL my identity.

It took me leaving here for a semester to realize that there was another reason why I clung to the brand of SMART GIRL — even as its side effects made me wish I could drop it, and that was because I was scared of the power of labels. I was scared of how they could make a girl no more than a dog, effortlessly emasculate a guy or reduce a person to a scrap of his ethnicity with the use of a simple racial slur.

My label may have kept me from getting invited to the wild parties, but it also gave me a niche, a place of acknowledgement and acceptance. It was certainly a better label than: GIRL WHO TRIED TO DANCE BUT ENDED UP DOING MORE OF A SCARECROW IMITATION IN FRONT OF THE ENTIRE SCHOOL, which was the label I’d worried about after that assembly freshman year. No, SMART GIRL was better than that, a safe label, the kind of label that I could use to shield myself from worse labels.

Knowing the power of these labels terrified me, especially because in my time away from Roaring Fork HS I realized something about myself, something more than what fit under SMART GIRL. I realized that I am gay.

And I was terrified of the stigma that that label held.

And, the easiest thing to do when you are scared of something is to ignore it, to just keep on acting the way you did before you got scared. So, I continued being brand SMART GIRL. I continued working to fill that identity, and to make sure that nothing contrary to it slipped out.

But … now it’s out. In fact, we can make it more official-there.”

Feeling lightheaded, I flipped my “SMART” sign around to reveal large block-lettering label of “GAY.”

“The label,” I began, but then stopped at the sound of applause. Two of my teachers stood up, clapping, and then everyone did: the teachers, the audience, my class, all standing, clapping, and cheering. I tipped my head back, grinning, laughing, stunned. The range of possible reactions I’d imagined as a response to this had featured, best-case scenario, stunned silence at first and then an eventual appreciation of my message as my speech went on. Applause at the end, maybe, hopefully, but never at this point; never like this. I felt weightless, amazed. I was out, I had done it, this thing that had scared me for so long, and as a response, I was getting … this?

I was filled with warmth and gratitude for my town, for my school, for the class of 2015, that I was still, incredibly, welcomed as a part of. At that moment, I felt such a sense of community with everyone in the room. I cleared my throat, tried to continue, stopped; there was no way you could hear me over everything. I laughed, awkward for a moment–what do you do in this situation? I hadn’t prepared–then as the noise died down I began again:

“The label of GAY GIRL is irrevocably revealed. And, standing here, still in one piece, having just been given a round of applause that I was really not expecting, I’m realizing that while the label is accurate, it’s also not everything.

No label is big enough to hold an entire person

But, we still keep trying.

Which of us have never been labeled as anything, never been the CLASS CLOWN, the OVERACHIEVER, the DUMB JOCK, the DRUGGIE, the PREPPY GIRL, the SLACKER? Which of us has never felt the constricting side effects of these brands?

It’s our nature to look around at people we don’t know and to try and define them. Labeling and being labeled are commonplace here, almost habitual.

But, every time we define a person so narrowly, we miss seeing the parts that don’t fit under that definition.

We are all more than the sum total of how we are seen and what is expected of us. We have this capability, this opportunity, to create our own identity and to live it.

From here on out, we’re no longer in the zoology classroom, where every species has a label clearly attached. From here on out, we’ll have to learn it as we go, build our opinions of others and our own identities as best we can without the help or harm of being taught it. And to me, that’s terrifying, and it’s also really wonderful.

Welcome to a time of living without ready-made labels. Welcome to a time when you’ll make perfect judgments and poor ones, where you can discover pieces of yourself that fit with who you want to become and pieces that don’t.

You can make up for this freedom, of course, by making more labels, labels of who is worth your time based on class, race, gender, IQ — you can make your own labels, if you want. It’ll be easy to do, and there will always be people who follow the labels you make.

But, you can also choose to give up these labels, to judge a person simply as a human.

This is our opportunity for a life without labels. Take it.”

Emily Bruell moved to Carbondale, CO at age three, and spent the next fifteen years skiing, hiking, and taking pictures in the Roaring Fork Valley. In her free time, she enjoys writing, playing piano, and volunteering in the nearby elementary school. She is currently a freshman at Bates College, and is hoping to major in Biology.

One thought on “A Life Without Labels”