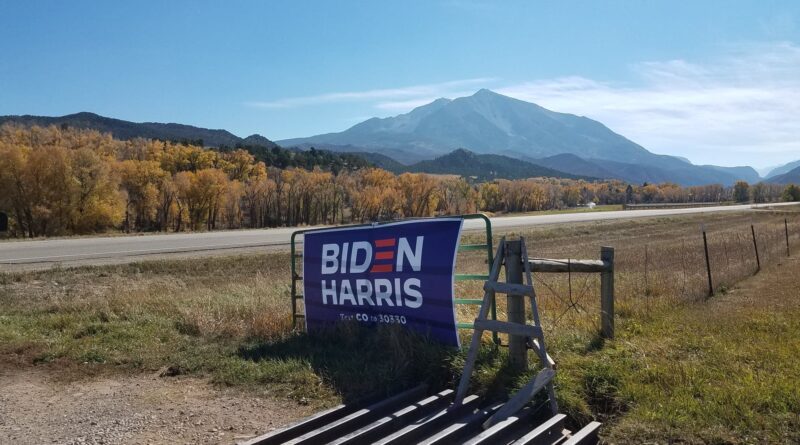 We need energetic younger leadership on our Garfield Board of County Commissioners. As a well-educated professional who is committed to all our communities in Garfield County, Beatriz Soto is the one. As a former member of the board for the organization where Beatriz works, I have seen her in action and have great respect for her. That she is bilingual and sensitive to the needs of all of our residents is a huge plus. That she is a woman adds new perspective. Our board is currently made of three fine older men who have contributed a great deal, and they should be thanked, but they are from another era and their interests no longer reflect the interests of the greater community.

Please vote for Beatriz. She’s the one to take us forward.

Francie Jacober: a candidate for all issues

If preserving our rural character, protecting our environment, our public lands, our water, our wildlife, addressing climate change, and ensuring the health, safety and welfare for all is important, the only real candidate for District 5 county commissioner is Francie Jacober.

An educator and entrepreneur with strong ties to the ranching community, Francie brings her experience of working collaboratively with others to address and solve problems. Although running from a specific district, a county commissioner is elected at-large and must be able to work with and represent all of our citizens, not just a special interest group.

On the other hand, Francie’s challenger, Jeffrey Evans, is not only a one-issue candidate, but a misguided one as well. His platform is limited to the Entrance to Aspen, an issue of importance, but not one that the county has jurisdiction over, nor the silver bullet. Mr. Evans proclaims himself the self-appointed expert on this issue and debunks the collaborative work done by the Aspen Community Forum members in their extensive Upper Valley Mobility Report, which also has been adopted by the Elected Officials Transportation Committee. He reminds me of the emperor with no clothes. The last person we need in office is another disrupter. We have seen the disastrous results of this over the past four years at our federal level.

There is a reason that all current Pitkin County commissioners and many of our community leaders, as well as Sen. Michael Bennet, endorse Francie Jacober. A vote for Francie is a vote for addressing the needs of all our citizens while keeping Pitkin County the special place it is.

We have known Francie Jacober for over 20 years and have the utmost respect for her. She is passionate about education, the environment and the well-being of the people, land and rivers of the Roaring Fork and Crystal River valleys.

Mitsch Bush will work across the aisle

We need a representative who can work across the aisle to represent western Colorado. I will choose a proven pragmatist, Diane Mitch Bush, who cares about our health care system, not an inexperienced demagogue who will simply posture, and get nothing done. Please vote.

Mitsch Bush and Hickenlooper for Colorado!

I am writing to urge you to vote for Diane Mitsch Bush as our 3rd Congressional District Representative. She is focused on issues that affect Coloradans, especially on the Western Slope. Affordable health care is at the top of the list. She will fight for us to lower premiums, deductibles and prescription drug prices. She will work to protect coverage for pre-existing conditions and funding of rural health care clinics, and will support expanded substance/opioid abuse prevention and treatment programs. Her opponent, Lauren Boebert, has no plan to address these issues. Let’s elect Diane, an experienced representative for CD3. Serving in Congress is a job for a person that has knowledge of the job and their constituents, not someone who sides with conspiracy theorists and disregards law and order like her opponent.

I also encourage you to vote for John Hickenlooper as our U.S. Senator. His opponent, Cory Gardner, has disregarded many requests for in-person town halls across the state prior to COVID-19. It’s not as if he wasn’t in our valley; he was, but just for photo ops for himself. Hickenlooper may not be a slick-talking politician like Gardner, but he is thoughtful and respectful. Gardner has unsuccessfully tried to repeal the Affordable Care Act repeatedly, which would leave many Colorado residents without health care coverage for pre-existing conditions, coverage for adult children up to age 27 on parents’ plans and coverage for people that may have met their lifetime maximum coverage amounts. Hickenlooper will protect health care for all of us.
Please join me in voting for Mitsch Bush for Congress and Hickenlooper for Senate. They both will stand up for Colorado, not special interest groups.

I am writing to support Diane Mitsch Bush for Congress. Diane is just what we need in this time as a divided nation. In her role serving in the Colorado State House, Diane reached across party lines and worked tirelessly to advocate for and listen to her constituents’ concerns.

Diane supports allowing Medicare to negotiate drug prices, implementing paid sick leave, and will fight to protect coverage for people with pre-existing conditions. Lauren Boebert supports policies that would keep health care and prescription drug prices high. She thinks the rules don’t apply to her — she defied health department orders put in place to keep people safe during the pandemic, and is against requiring vaccinations for deadly viruses like measles and meningitis, even during the largest public health crisis of our time.

Most importantly Diane clearly has the experience that her opponent does not. Diane shows the maturity and level headedness to govern in these highly charged and divisive times.

Would Boebert be an enabler?

Lauren Boebert says only Donald Trump supporters are “real Americans.” So more than half the U.S. population is not, including many who’d be Boebert’s constituents. We need someone more inclusive and respectful as our representative, meaning Diane Mitsch Bush from Steamboat Springs. She’s already shown she can work across the aisle in the state legislature to solve actual problems that can’t be solved by packing heat.

Boebert wants to represent us (or at least some of us) in Congress. She says she is pro-freedom, pro-guns, pro-Trump, pro-Constitution, pro-energy, pro-life, pro-Colorado, and pro-America.

What do any of those mean? Freedom to do anything anyone wants? Lots of guns for everyone as a way to solve disputes? Pro-energy with a drilling rig or compressor station in your backyard, destroying your ability to enjoy living on your land? Pro-life, meaning freedom doesn’t include a woman’s right to control her own reproductive functions? Pro-Colorado. Isn’t that why we all live here? And pro-America, yes, but the current regime terrifies many of us. Pro-Constitution and pro-Trump? A contradiction in terms. Trump and his enablers are shredding the Constitution. Would she be another enabler?

We are writing to strongly urge the voters in Congressional District 3 to please vote for Diane Mitsch Bush for Congress. As a state lawmaker, Diane Mitsch Bush pursued bipartisan solutions to nonpartisan problems.

Diane is by far the most qualified person in the race; she is a person who will understand her oath to uphold the Constitution of the United States. Diane will not follow conspiracy theories; she has no time for that. While in the Colorado legislature, Diane was known as one of its hardest workers and as having a deep knowledge of the issues.

Diane is focused and tenacious and will fight for our access to affordable health care. In Congress, Diane has pledged to fight to (1. Reduce the cost of premiums and prescription drugs, (2. Reduce deductibles, (3. Allow Medicare to negotiate for drug prices, (4. Protect coverage for pre-existing conditions, (5. Increase funding of rural health clinics, and (6. Expand substance/opioid abuse prevention and treatment programs.

Diane was endorsed by The Pueblo Chieftain and The Denver Post where they said, “Diane Mitsch Bush has a good vision for Western Colorado — one that is centered on protecting and expanding public lands to promote an outdoor recreation-centered economy.”

Serving in Congress is not a job for people who do not know what they are doing, or worse, for someone who has intentionally disregarded law and order.

For the reasons above, we ask that you please join us in voting for Diane Mitsch Bush for Congress in the 3rd Congressional District of Colorado.