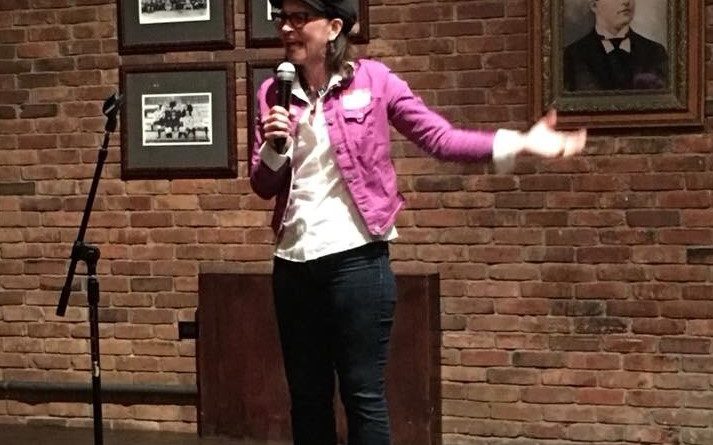 The first time I remember feeling the shame of economic insecurity, I was in 4th grade.  We had just moved and, at my new school, kids who got free lunch had to work in the cafeteria. There I was:  nine-years old, the new girl, standing on the grownup side of the lunch line, dishing out Salisbury steak and mashed potatoes, wearing a hairnet on backwards because no one told me that the knot didn’t go in the front.

The last time I felt that particular flavor of shame was two years ago when I went to the food pantry for the first time… as a customer.

In between those two events, I rode a roller coaster of privilege and poverty. After my divorce, I lived on a tight budget. I was mortified when I bounced checks to my hairdresser, my daycare provider, and my therapist, because I had no idea how to manage money on my own. But I figured it out and realized that if I made more, it would be easier to manage. I kept moving on to better and better jobs, with bigger and bigger paychecks, that I liked less and less.

A few years ago, I had an impressive title doing a job that I was trying not to hate because it paid more money than I ever imagined making… more money than either of my parents ever made. Didn’t that make it a good job? It was stressful and had a horrendous commute, but I told myself that I just needed to suck it up and make it work.

I got a house cleaner, a personal trainer, bi-weekly manicures, monthly pedicures and waxings. I had my organic and name brand groceries delivered, and paid for a Match.com subscription. I knew these were luxuries, but I convinced myself they were also necessities to make my busy single-parent life bearable. I had no time to volunteer, but I thought it was important to teach my kids about social responsibility so I sent them on a Unitarian youth group field trip to deliver sandwiches and socks to homeless people and I bragged on Facebook when we went on a family volunteer vacation to an orphanage in Costa Rica.

And then I got sick and I knew I had to make a change… quickly. I woke up one morning, sent a resignation email to my boss, and walked eight doors down the street to the coffee shop where I bought my iced coffee with almond milk before I got on the train every morning.  I asked the 19-year old store manager for an application that I filled out with pen, and I applied to be a part-time barista. No resume required. She hired me. To supplement my minimum wage income, I put up flyers on telephone poles and the coffee shop bulletin board and I became a neighborhood dog walker.

I “sacrificed” all the luxuries I had grown accustomed to, cleaned my own house— or not, painted my own nails— or not, grew out my hair— everywhere, cut cable, and walked to the grocery store for exercise where I purchased a lot of store brand boxes of pasta. I knew I was still richer than most of the world even if my kids missed popsicles and cookies. I kept reminding myself (and them) that we had clean running water and a roof over our heads so we would be fine.

And then I got really sick. I was rushed to the ER. When they admitted me, I called the coffee shop and the owners of a cocker spaniel, a beagle, and a goldendoodle to tell them I’d be out of commission for a few days, tops. But when I left the hospital 15 days later, it was without my colon, on a liquid diet, and I couldn’t work. I became a professional patient. The salary sucked.

Instead of making lattes and picking up dog shit, I entertained visiting nurses, went to the doctor and was in and out of the hospital for additional surgeries, bowel obstructions, and numerous other complications including post-surgical delirium hallucinations that were sometimes entertaining and sometimes terrifying. Over the next year, I was either in the hospital, recovering from surgery, or getting ready for my next one. I applied for Social Security Disability and was rejected. I appealed and waited… and worried.

Because I suddenly had zero income, one of my visiting nurses suggested I apply for SNAP benefits, which is the fancy new name for food stamps. I remember looking down at my purse, a purple Coach bag that my sister bought me at a consignment shop, and thinking, “Is this what public assistance looks like?”

The caseworker at the aptly named Department of Transitional Assistance took my photo for my SNAP card and told me that my son would now be eligible for free lunch. I was horrified. He was in high school! Would they make him wear a hairnet? Would he have to dish out lunch to his friends? Apparently not. All the kids now have food cards with a bar code, and no one knows how money gets loaded on the card. I asked him if the other kids knew that he got free lunch and he told me that his close friends were jealous because he never had a negative balance and could always buy the buffalo chicken calzone.

Then my daughter started coming home from college and the SNAP benefits weren’t cutting it. My kids were getting sick of pasta again. When someone suggested the food pantry, I thought about how I used to pity the poor people who had to eat my rejected groceries. I was a food pantry giver, not a taker!

But I went anyway, wearing a baseball hat because I worried about my neighbors seeing me. The food pantry volunteers went into a back room and came out with grocery bags based on the size of your household. When I got home, it was kind of like a weird grab bag, discovering what surprises they put inside. Sometimes, I looked through my bags while I waited for my ride home.

One day, a tiny little Asian woman was outside doing the same thing as she loaded her metal grocery carriage. She reminded me of my Lithuanian great grandmother because she obviously cut her own bangs and didn’t speak English. She handed me a platter filled with fresh fruit and smiled and nodded. I imagined that she was trying to tell me she wouldn’t be able to eat it before it got slimy.

My kids always knew when I went to the food pantry because of the sudden appearance of weird stuff in our kitchen. There were the items I affectionately refer to as welfare gourmet like ground beef in a tube, long bricks of yellow American cheese, and bags of generic Rice Krispies that taste like air. I got very creative bridging the gap between my privileged past and my humble present, like making food pantry sorbet in the Cuisinart ice cream maker I got in the divorce with blueberry pie filling, brown bananas, powdered lemonade mix and canned pears. It was fucking delicious.

I always knew that I was luckier than most people at the food pantry. I lived in a town that thought my kid should be able to play soccer even if his mom couldn’t pay the athletic fee, and I wanted to tell stories but I couldn’t afford the cover charge at story slams so I became a volunteer and got in for free. My best friend called me every single month to find out if I needed help paying the rent. I usually did. Sometimes my pride made me feel like crying and vomiting at the same time, like when some friends came up with the idea to host a fundraiser. But I learned to just say thank you.

While I was never in the 1%, I did know what it was like not to worry about paying bills and to be in a position to help other people. I hope to be there again someday, but in the meantime… Fuck shame. It’s a waste of time and energy. Sometimes we give help and sometimes we need it. Period.

Julie M. Baker is a writer and a storyteller. She is determined to finish her memoir in this lifetime. Her latest working title is Maybe I’m Just Lazy: One Women’s Journey Through MS and Life.