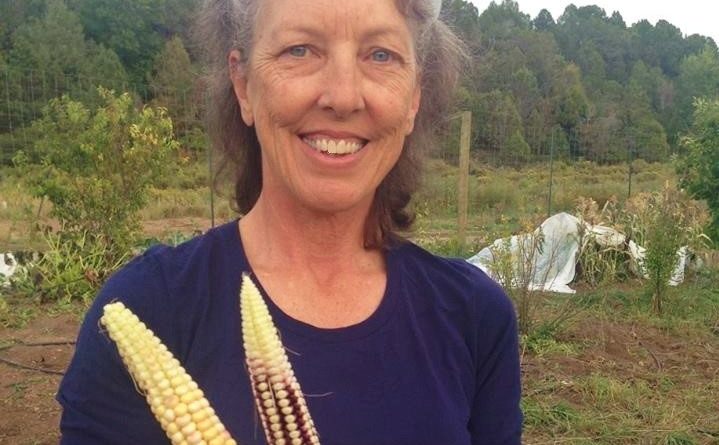 Kneeling over a patch of bare earth, I gently wipe away sticks and small stones with the palm of one hand. The other hand cradles the seeds of Amish Deertongue lettuce, Danvers Half-long carrots, Cherry Belle radish, Bloomsdale Spinach. These, along with a variety of wild weeds that will inevitably pop up among the vegetables I plant, will be the ingredients of my family’s summer salads.

I push my finger into the pre-moistened soil, creating the smallest of indentations, drop in a seed and cover it with a pinch of soil. I repeat this act until all of the seeds are safely in their spring bed. Then I pat the whole bed down, spread a thin layer of leaf mulch over the top and sprinkle it with water.

Rebelling against traditional vegetable gardening, where each species is separated into its own row, I prefer the intercropping method which mixes different vegetables together in a random pattern, much as nature does. The vegetables benefit from companion planting and pests are less likely to hone in on their chosen crop if it’s dispersed among other species.

I also refrain from over-weeding, preferring to let the wild edibles grow alongside their domesticated cousins. Eventually purslane, dandelions, plantain, and mallow will thrive among the lettuce and carrots. It’s much less work for me to selectively control weeds than to practice total elimination, and I get the nutritious benefits of these forgotten foods.

Growing my own food gives me a sense of security and satisfaction, but an added joy is the fact that my vegetable seeds don’t come from giant conglomerates like Bayer-Monsanto, currently controlling a third of the world seed market. They come from my own garden, carefully selected, saved and replanted year after year. Through generations of adaptation in my garden, the plants produced by my saved seeds are tolerant of our short season, high altitude, and dry conditions.

Civilization began with the dawn of agriculture 11,000 years ago, when people began planting some of the wild grain they’d saved from previous years. Seed-saving meant a sustainable and stable source of food for growing populations. It remained an essential skill until just 100 years ago, when commercial seed companies and mail-order delivery made the time consuming process of saving seed unnecessary.

Up until the early 1900s home gardens consisted of seeds handed down through multiple generations of family or traded with neighbors. But when catalogs for new varieties became available and convenient packets of seed could be ordered for pennies, seed-saving began to go out of practice. Within a few generations, the knowledge of how to procure seeds from one’s own garden for planting the following year, had all but vanished.

At the same time, commercial seed companies were growing in number. By the 1990s, there were over six hundred companies selling garden seeds and providing seed to farmers for large scale commercial agriculture. Meanwhile, scientists were frantically trying to figure out how to feed the growing human population. Mid 20th century innovations in seed development contributed to the ability to produce larger quantities of food.

Unfortunately, large-scale agriculture turned out to be an unhealthy and unsustainable model. The practice of monocropping; planting a single species over hundreds of acres, created pest and disease problems which led to the use of more chemicals and to the necessity of developing  disease resistant varieties of seeds, some through the creation of Genetically Modified Organisms (GMO).

Soon the ag-chemical companies were the same ones that owned the seeds. Multiple mergers and acquisitions narrowed the field to just six companies owning 90% of the world’s seeds. And I mean own. Patents on seed varieties prevent farmers and home gardeners from legally saving their own seed. Farmers faced lawsuits when Monsanto’s patented seeds fertilized the farmer’s nearby fields and the resulting seeds were sold or replanted. Worse, the introduction of the terminator gene that produces sterilized offspring effectively eliminated the farmer’s ability to save and replant seed.

But the real loss has been in species diversity. It’s estimated that in the last 100 years, we’ve lost over 60% of heirloom vegetable varieties. Because people stopped saving their family seeds, thousands of varieties disappeared, replaced by a limited range offered by seed companies, which only sold the most profitable varieties.

The popularity and availability of hybrid vegetables has also contributed to the demise of seed-saving. Hybrids are created by crossing two or more varieties of a species to produce a new variety. Hybridization limits the ability to save and replant seeds, because within a few generations the hybridized seed will become unstable and produce a wide variety of traits.

Conversely, heirloom seeds are open-pollinated, meaning they can reproduce true to type, so every seed saved will result in the offspring having identical traits as their parents. Crucial to seed-saving is never planting more than one variety of each heirloom vegetable, so as to avoid accidental cross-pollination.

The era of saving seed is already in its twilight and there is the looming possibility that it will be illegal to engage in this ancient practice at all. If that happens, humanity will be completely dependent on the giant chemical conglomerates for our food. That could spell disaster for civilization, which ironically sprung from saving seeds for agricultural use.

But there is a growing resistance movement of farmers, gardeners and small seed companies that are endeavoring to relearn the ancient skill of seed-saving and teach it to others. The mother of this movement is Vandana Shiva, renowned activist against GMOs and seed patents, and passionate seed-saving advocate.

Shiva said “The simple act of sowing a seed, saving a seed, planting a seed, harvesting a crop for seed is bringing back this timeless memory of our oneness with the Earth and the creative universe. There’s nothing that gives me deeper joy than the work of protecting the diversity and the freedom of the seed. Every expression of diversity is an expression of freedom.”

I’ll add that every seed saved and planted in my own garden is an expression of joyful resistance.

A Jill-of-many-trades, Sue is currently making a living planting and tending other people’s gardens. She is also the creator and curator of the Pioneer Heritage Vegetable Garden and Hattie’s Kitchen Garden for the Carbondale Historical Society. Sue has taught adult classes on organic vegetable gardening and seed-saving, as well as contributing to garden education in several local elementary schools, and her highest desire is to continue to learn and teach the forgotten art of seed-saving.