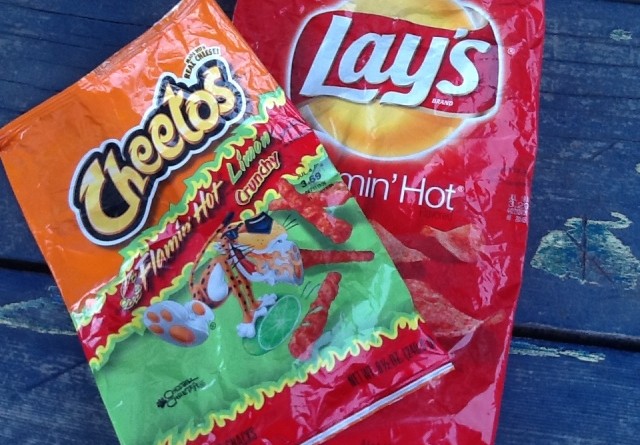 Nature Valley is a bad place to live. An ingredient in this granola bar is palm oil. Kind bars are unkind. Their bars use palm oil. Doritos are dripping in palm oil. These products are not alone. “Palm oil is the most widely consumed vegetable oil on the planet, and it is in about half of all packaged products sold in the supermarket.”

Palm oil is used everywhere in everything, and 85 percent of palm oil production comes from Indonesia and Malaysia.  From lipstick to chocolate to biodiesel, the harvesting of palm oil is a destructive practice — not just for the rainforest and our environment, but also for the orangutans and people who live there.

Check your labels. Like high fructose corn syrup, or “syrup,” the label naming of palm oil has 19 aliases, sometimes just “vegetable oil.” Every time you wash with that bar of Dove soap, a piece of the rainforest disappears, and the less rainforest, the more global warming, and the closer we get to extinction of orangutans and other species like tigers and elephants.

According to Alex Shoumatoff in “Vanishing Borneo: Saving One of the World’s Last Great Places,” (Yale Environment 360 — published by the Yale School of Forestry and Environmental Studies), palm oil has replaced the saturated or high-cholesterol fats popular for centuries in cooking and other consumables, and there is no end in sight. Unlike soy plants that are regularly replanted to harvest soy oil, the oil-palm tree produces for 20 years. It is a tasteless oil that comes from the nuts of an oil-palm tree. It can be heated to high temperatures without separating, it doesn’t turn rancid at room temperature like other edible oils, and it is used in a multitude of products. It is a money-maker, and its production won’t slow anytime soon as demand continues to increase worldwide.

Since the 1960s, Indonesia and Malaysia have produced 85 percent of the world’s palm oil and that is expected to double by 2050. That means there are too many people on the planet consuming too much bad food at the sake of not only their health, but also the well-being of the planet. These numerable consumers are driving the bus of big palm oil business.

The harvesting of palm oil has created a $50 million-a-year industry at the cost of rainforest habitat, mainly in Borneo. “In 2015, 17 million hectares of oil palm yielded a total of 62 million tons of oil, while the 120 million hectares planted in soy yielded 48 million tons” (Vanishing Borneo). The rainforest that houses those hectares of palm oil is quickly being decimated, and it is the natural habitat of countless native species like butterflies, moths, and wild pigs, as well as ancient tribal cultures.

The rainforest in Indonesia has been in jeopardy since the 1950s when the development of synthetic rubber ended natural rubber production in Borneo. Not long after, the eradication of the rainforest began in earnest. Step by step, lovely hardwood trees were felled, the remaining peat forest– deep in decomposing, combustible vegetable matter– was regularly set fire to clear the way for the planting of more palm oils trees.

In 1997, “the peat fires released 2.5 billion tons of carbon into the air. It happened again in 2003-4 and in 2015-16 when thousands of orangutans died of starvation and thousands of native peoples were hospitalized for smoke inhalation. Indonesia’s peat fires are a significant source of greenhouse gas emissions.” (Vanishing Borneo)

It’s difficult to fathom the harm to this rainforest, and by extrapolation, the rest of the world, but according to Alex Shoumatoff, it’s very real. The lowland Borneo rainforest is still the third-largest in the world (after the Amazon and Equatorial Africa), but fifty percent of what once covered the island is gone. The area that is most effected is part of the most ancient rain forest on earth: 130 million years old, more than twice as old as the Amazon’s, and with the greatest density of higher plant species – an estimated 15,000 flowering species.

Also notably alarming, over the last 20 years, the orangutans have lost ninety percent of their habitat. By the 1980s, the deforestation rate in Borneo was the highest on the planet. There are only maybe 30,000 orangutans left in Borneo and very little forest remains to release the ones in care center cages displaced by fires and loss of habitat.

There is a Catch 22 in all of this very disheartening and frighteningly bad news.  You probably can’t avoid palm oil, and maybe you don’t want to. According to the Association of Zoos and Aquariums (AZA) that advocates on behalf of elephants with a unified and consistent voice, boycotting palm oil would mean the loss of livelihood for millions of workers worldwide. Instead, they suggest that you just have to shop wisely, and they have a shopping guide, but curiously, there are so many brands and products on that list that are bad for anyone to eat.

Although it’s hard to believe, several major food-producing companies are adhering to the Rainforest Action Network’s (RAN) Conflict Palm Oil campaign. RAN notified many of the “Snack Food 20” that their harvesting practices were unethical and a harmful threat to the rainforest and the planet. Several of the companies that RAN put on notice about their conflict palm oil problem responded favorably. In 2014, Mars, Kellogg, and General Mills began strengthening their palm oil commitments, policies and sourcing practices.

One of the largest consumers of palm oil, Cargill, pledged to improve the sustainability of the palm oil industry throughout Indonesia and Malaysia. “In July 2014, Cargill introduced an updated Palm Oil Policy, committing to sustainable, deforestation-free, socially responsible palm oil.” As a show of good intention, they joined the Forest Trust, a non-profit organization that helps companies deliver products responsibly. They also signed the Palm Oil Pledge at the 2014 U.N. Climate Summit. That pledge, however, was disbanded less than two years later.

It’s just all so much lip service from the evil snack food empire. We’re destroying our own planet for snacks.

Of the Snack Food 20, PepsiCo was the slowest to join in the palm oil action effort  and why would they? PepsiCo’s palm oil supply chain is vast — including plantations, mills, collection ports, refineries, and product manufacturers. Annually, PepsiCo uses the equivalent palm oil to fill enough Pepsi cans to reach around the earth 4 times. And fun fact, Cargill supplies PepsiCo with most of its palm oil.

PepsiCo is the largest globally distributed snack food company in the world and the most influential of the Snack Food 20 companies, and did take action in October of 2015 with its Palm Oil Action Plan. The plan reveals that while PepsiCo consumes more than 450,000 metric tons of palm oil annually, the company ensures its customers that its products will be made with sustainable palm oil by 2020.

Like the others in the Snack Food 20 group, PepsiCo is aware of the discriminating work practices, the disappearing ancient rain forest, and the destruction of native species. They know about the rings in the supply chain. They have “plans” to use sustainable palm oil, but that doesn’t mean they will use less of it to make packaged poison for people to consume.

PepsiCo should be leading the industry. With sales of $65 billion, it’s the world’s second largest snack food company. The most obvious action as a consumer is to stay away from all Frito-Lay (a PepsiCo leading brand) snack foods: Fritos, Cheetos, Tostitos, Doritos, Rold Cold, Cracker Jack, etc. Through Frito-Lay, PepsiCo is the largest globally distributed snack food company in the world, with sales of its products in 2009 comprising 40 percent of all “savory snacks” sold in the United States and 30 percent of the non-U.S. market.

Like PepsiCo, responding to outside pressures, many companies besides the Snack Food 20 have released “responsible palm oil commitments,” usually promising to source oil that is certified sustainable by the Roundtable on Sustainable Palm Oil (RSPO)  by 2020. This means that the oil meets standards around human rights, company transparency, and deforestation. The reality is still terribly bleak. They will continue to produce the oil in amounts that are staggering to imagine from now until 2020 and beyond. Besides wise shopping choices, individual consumers have to exercise choice and take action. Boycott PepsiCo products, and those of other Snack Food 20 companies.

Help the Orangutan Foundation acquire rainforest so it can release its hundreds of rescued orangutans, or adopt or foster one of these “red apes.” Support the Rainforest Action Network’s Conflict Palm Oil Campaign to make sure the snack-food giants really do commit to zero deforestation, and child labor practices. It’s a start, and creating awareness of this issue is a long road.  Most importantly, besides snack foods, find out if palm oil is in the things you are eating and using, and cut down or eliminate your consumption of these products. Some 70 percent of what is labeled “vegetable oil” is palm oil.

When you eat food that comes out of a bag, a box, or a package of any kind, chances are you are eating palm oil. Look for the RSPO label to ensure you purchase products made with certified sustainable palm oil. This label gives you the confidence that the palm oil was at least produced in a socially and environmentally responsible way. Most importantly, those “Jacked” Doritos; you and your body can live without them, and so can orangutans, tigers, elephants, butterflies, and flowers in one of only three rainforests in the world.

Maura Masters cries every time she sees a wheelbarrow filled with orphan baby orangutans. She tries to eat locally, avoid all packaged foods, but still, she is very aware that she eats and uses products made with palm oil on a regular basis. It keeps her up at night, and so she will try to be more aware of her consumer choices.