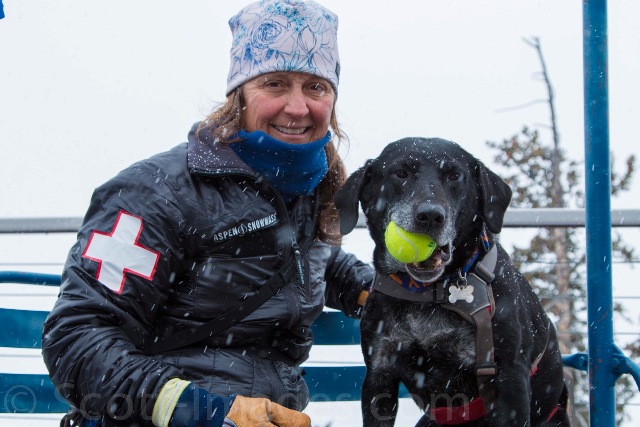 I never thought I would be in a job for 30+ years, but when you love what you’re doing, why change?

When I was in college I had a part-time job, a ski patrol position at the Arizona Snowbowl near Flagstaff Arizona. I had to pay my dues by starting out parking cars in my ski patrol uniform. Not the most glamorous job, especially making $3.25 an hour, but the love of skiing fueled my interest, perseverance, and passion.

Every year in the fall when the mountains begin to turn white, there’s a sense of anticipation and excitement. The mountains are calling, the skis are working their way out of the basement, and it’s time to click into the bindings and slide around the mountains through trees, stumps, rocks, steep chutes, and powder. It’s the season to embrace and regroup with my “winter friends.” There is something about prepping the mountain before we are open that is very peaceful.

The mountain in Arizona was a place of magical energy and camaraderie, but the more than occasional dry winter, my then boyfriend and now husband’s departure from patrolling to medical school, and family in the Aspen area pushed me north. I landed at the Aspen Highlands ski patrol more than 30 years ago.

Skiing was the original driving force in my career, but it opened many other doors that kept my keen interest in the profession. There was learning how to care for the sick and injured, early powder mornings tossing explosives into avalanche prone slopes, training avalanche rescue dogs, and more.

There have also been trials and challenges along the way. An ACL knee injury and surgery my second year in Aspen was an early setback. The cold mornings fighting off frostbite, long days showing up before first light and getting home long after sunset continue. It was, and still is, a male-dominated profession.

There were girly pin ups (long ago and gone now), stinky, small locker rooms, and the hard work of earning the respect and trust of men, some who questioned women in the ski patrol world. I ski-patrolled two years while pregnant in the late 90s, and then there were the subsequent years sneaking off on a quick break to pump breast milk in the bathroom.

Although there were a few years that I was the only woman on the patrol at Highlands, the women and men I have worked with over the years have often become very close friends. It is a tight community much like a family, and my boys and my husband are a part of that. So many people make me laugh daily.

Now in my later years, I’m in a leadership role and I enjoy mentoring young patrollers whose energy is invigorating while we learn from each other. My two boys are off to college, and I still get a charge out of going to work, and recently took on a new puppy to train. Although my knees feel older, the rewards of the job still enrich me and keep me young. I look in the mirror and say “Whoa!” but inside I feel younger than my reflection.

Another winter is upon us, my old avalanche dog, Kaya, is retiring, and I’m looking forward to beginning my routine for another season. Being the first one up the mountain with my new pup, Meka, and the last one down just somehow feels right. Usually, I am not only physically tired at the end of the day, but also rejuvenated and sleep well looking forward to the next day.

Lori Spence received a BS in recreation resource management from Northern Arizona University in 1985 and has been recreating one way or another ever since. Either as a volunteer with AVSC and the Sunshine Kids, a professional ski patroller at Aspen Highlands and Squaw Valley, a back country ranger at the Grand Canyon National Park and a kayak instructor, or an outdoor enthusiast enjoying skate skiing, SUP, hiking, biking and river trips, she and her husband have passed their love of the outdoors on to their two sons.