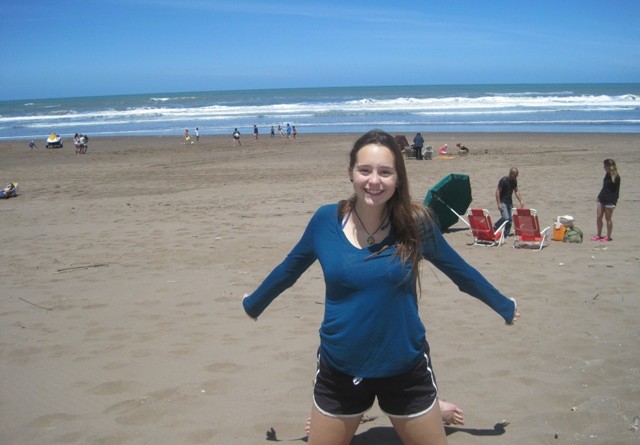 When I was younger, I pondered being an exchange student. I had a wild desire to explore Western Europe, the UK and Ireland. I wanted to see the places my ancestors had come from decades and even centuries ago on old wooden ships. By the time my junior year of high school came around, I decided to make it less of a dream and more of a goal. So I applied to Rotary in October of 2014. In April of 2015, I was informed that I’d be spending my senior year in Argentina. My junior year of high school was a long, stressful one. Before leaving for Argentina, I applied early to Colorado Mesa University and was accepted, and I am at CMU now.

I arrived in Argentina on September 2, 2015 and left July 17, 2016. I got there at the end of winter and got to experience their celebration of spring at the beach, which was a party that basically lasted all weekend.  My city in Argentina is called Tres Arroyos (3 Little Rivers), and it is in the south of the Buenos Aires province, close to the beach. The entire Buenos Aires province is flat, flat, flat and green. My city has a population of about 25,000 people, a small town by their standards. The city has a strong population of Dutch and Danish descendants. There are Dutch and Danish flags hung around the city, Dutch and Danish schools, ice cream shops, etc.

I had five years of high school Spanish under my belt before I left, and, having done quite well in Spanish class, was feeling pretty confident about living in a Spanish-speaking country. However, in Argentina, they speak much quicker and much more differently than how I learned to speak in school. It took me about four months to become fluent. Now that I’m back in Colorado, when I have conversations with native Spanish speakers, I speak differently than they do. I have come back with an Argentinian accent that other Latinos sometimes don’t even understand. In Argentina, “Me llamo Megan” is pronounced “Me shamo Megan.” “Tres Arroyos” is “Tres Arroshos”. And so forth. They also use different words than in Mexico or Spain. In Mexico, a banana is “platano.” In Argentina, it is “banana.”

I lived with 4 host families. I was with the first family for about 5 months all together (I did some travelling in between). I don’t have a favorite host family; they were all amazing and so supportive and treated me just like another daughter. My first host family was my host mother, Silvia Pailhe, a science teacher and writer, my 20-year-old brother Lucho Cortese who is in college in Buenos Aires studying to be a radio reporter, and my 17-year-old sister Lucia Cortese, an artist who is living in Pagosa Springs, CO now as a Rotary Exchange Student. She came to visit me during Mountain Fair, so if you saw me at the fair, you probably met her.

My last host family was my mother, Celina Fernandez Destain, an interior decorator and painter, my 20-year-old sister Sara Fernandez who is studying astronomy in La Plata, and my 18-year-old brother Martin Fernandez who returned in February from his exchange in France.

School is extremely different in Argentina than in the US. After Kindergarten, you go to six years of primary school and six years of secondary school. In secondary school, you pick a “division” or a “major”. Some of the majors you can pick are: Economics, Natural Sciences, Social Sciences, and Visual Arts. When I first arrived, I went to the public school from 7:30-1 with my host sister, Lucia, who was at the time in fifth year Visual Arts. In Argentina, the students stay in one classroom all day with the same classmates and the teachers come to us, moving between classrooms and schools.

School ended in November for summer break, and I spent most of the summer traveling to Buenos Aires, Necochea, Olavarria and the north of Argentina. After summer break, which ended in March, Lucia moved here to Colorado, and I continued on to sixth year with her class. I often felt bored in class, and I didn’t really like the way the school was run, so in June, my Rotary counselor suggested that I switch to the private Dutch school where she teaches English. It was a smaller, calmer, Natural Sciences class in a smaller, nicer, cleaner school. I had more friends and the teachers gave me more work to do so I wasn’t bored, and unlike the public school, the teachers never cut class.

One of my favorite parts of the whole year was the Rotary bus tour to the north. I traveled on a bus with 49 other exchange students from all over the world. We went from Buenos Aires to Iguazu Falls, Jujuy, Salta, Tucuman, Cafayate, and Cordoba. Iguazu was one of the hottest and definitely the sweatiest day of my life. We hiked around the park and went on a boat underneath the waterfalls. We stood at the Triple Front border with Brazil and Paraguay and took pictures of the rivers and the neighboring countries. We went horseback riding in Salta, tasted wine ice cream in Cafayate, hiked in the desert and ate llama in Jujuy, and soaked in the hot springs in Fiamala.

Now that I’m back home, I can say that I’m very grateful that I had the opportunity to go to Argentina, and that I wouldn’t trade my year there for anything. I owe so much to everyone I met. They were kinder to me than I deserved. I miss them and I love them, and I’m so grateful that they took me in when I was at my worst, feeling like a lost puppy on a dark, rainy night. I will go back to Argentina when I can, and when I do, I know it will feel like going home.

Megan is a native of Carbondale, Colorado, and spent her senior year of high school living and studying in Argentina. She is now a freshman at Colorado Mesa University, and hopes to be an international interpreter one day.