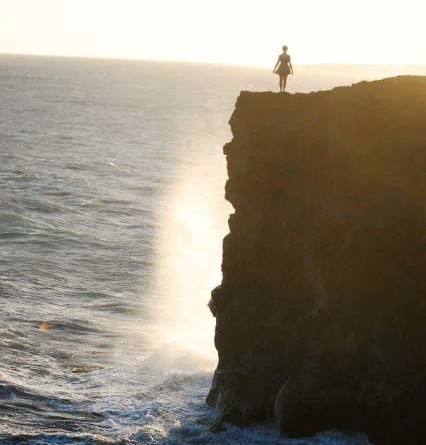 You know how there are all those people out there like Thoreau and John Muir, or maybe just a friend of yours, who are able to find this incredibly deep appreciation of nature? They are inspired by it. They learn from, and have trouble comprehending its beauty. Well, I’ve always loved our natural world and have appreciated it and thought it was beautiful, too, but never to the degree that it seemed to these other people. I never looked at or watched something and felt moved deep down inside. And, to be honest, this always bothered me a bit. Why could Thoreau get so much out of a pond when I couldn’t?

Well, last week this all changed for me, because I had an experience that affected my whole being and touched me down to my core. This experience was profound enough to make me want to write about it, which is saying a lot, because I generally avoid writing at all costs.

It all started with a hiking trip taken by my friend, this guy we met at our local coffee shop and me. The hike started at Waipio Valley, which is a beautiful and sacred place in Hawaii with a very tall and very lovely waterfall. When I saw Waipio Valley for the first time, I felt like I wasn’t appreciating it as much as I should, maybe because I had heard so much about it being so beautiful, which it was, but not breathtaking or anything — at least not to me. This was just one of the many times that I felt bothered by my lack of deeper appreciation for something naturally beautiful.

There’s a trail that’s about 9 miles or so from Waipio Valley to Waimanu Valley. Waimanu Valley can only be accessed by this trail, or by the ocean. Nobody lives there, but there is a small campground near the beach and a trail that goes back to some rather impressive waterfalls. It is also home to another waterfall that is 2,600 feet tall, making it the tallest in the country. It is this valley that we hiked to. We arrived just before dark, and were greeted by two Argentinian travelers who invited us to share their fire; an invitation that we accepted with gratitude before retiring to our tent for the night.

The next morning, I woke up and found a nice rock on the beach to sit and enjoy the sweet potatoes we had brought for breakfast while I watched the waves coming in. Now, watching waves is always a wonderfully captivating experience. It’s a lot like watching a fire, you can just zone out and be perfectly entertained and content.

Well, these waves were on an entirely different level. They were perfect in every way; I can think of nothing that would make them more beautiful or more satisfying to watch. And, that is the best word I can think of to describe them, utterly satisfying, from the beginning to end. Now, I will attempt to describe these glorious natural phenomena.

To set the scene, I’m sitting on a beach in a lush valley with waterfalls plummeting thousands of feet to the ground behind me. There are precisely 9 other people in the whole place and none are within my sight. The sea is perfectly calm so each wave appears to come from nothing, and they are forming very close to shore, giving me an upfront seat to the action.

When the waves were still in their beginning stages they look like a monster rising stealthily from the depths and then slowly transforming into the shape of a wave. And, these waves were perfectly shaped. They were very thin from front to back, and the front wall (the one I could see) became vertical as it rose. The crest of the wave was razor sharp, giving it a crisp, clean look that was unbroken for the length of the wave.

As the wave continued to grow, the crest held its shape even as the wave became concave. There was a second when the wave appeared to freeze as it became more concave without losing shape. Then, at precisely the right moment, it broke. And, in that crashing white water was the release of all the energy that had been building up since the monstrous form first took shape.

It was so powerful that I could feel the buildup and release in my own body.  So powerful that just writing about it brings back the feelings I felt watching it. I can’t describe exactly how it made me feel except for deeply satisfied, and perfectly content. Being truly content is difficult to achieve in our society where we’re always pushed to strive for more, so a moment when it happens is something to be relished.

I know this experience is something I will never forget, and I doubt I will ever see anything like it again. It was a perfect moment that lets me understand the similar natural moments that others have had. I know it has and will continue to affect me in various ways and I feel so fortunate to have experienced it.

Rachel Irons grew up in Anchorage, Alaska and was lucky enough to have parents who introduced her to many outdoor activities, and took her to many beautiful places around the state. Since completing her undergraduate degree at the University of Colorado, she has been working, traveling, exploring, and spending time with friends.

One thought on “Waves”