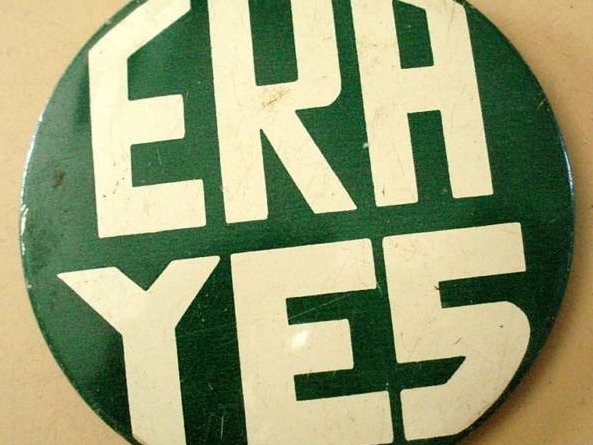 “I would like my granddaughters, when they pick up the Constitution, to see that notion – that women and men are persons of equal stature – I’d like them to see that is a basic principle of our society.” – Chief Justice Ruth Bader Ginsberg

It’s been 93 years since Alice Paul drafted the Equal Rights Amendment to the U.S. Constitution, and we’re still waiting for it to be ratified. Nearly passed into law in 1982 by 35 states, (3 short of the required three-fourths or 38 state legislatures) ERA ratification was re-introduced to Congress in 2013 where it has sat relatively untouched since. Some politicians think the Equal Rights Amendment (ERA) is redundant, and covered by the 14th and 19th Constitutional amendments. But is it really, and is it enough?

Supreme Court Justice Antonin Scalia said as recently as 2010, and using the 14th amendment as reference, that he didn’t think the Constitution prohibits sex discrimination. With the recent death of Justice Scalia, the balance of the Supreme Court is at stake and the rights of women could be compromised. Former Secretary of State Hillary Clinton received the endorsement of the Human Rights Campaign and pledged to support the Equality Act, which would amend the Civil Rights Act of 1964 to include discrimination against LGBT people, but she does not include the ERA in her current plans for women’s advocacy should she become president in 2016.

Women’s rights fall under the civil rights umbrella for the two democratic presidential candidates, Sec. Clinton and Sen. Bernie Sanders (D-VT.) Both candidates co-sponsored the re-introduction of the ERA in 2007 with Senator Ted Kennedy (D-MA) —also known as the Women’s Equality Amendment. “We know from the failed ratification experiences of the past that amending the Constitution to include the ERA will not be easy to achieve. But, the women of America deserve no less,” they said then. The amendment has been reintroduced in every session of Congress since 1982. Carolyn B. Maloney (D-NY) sponsored it most recently in August 2013. Welcome To Fruita! What, exactly, is the hold-up?!

Today, both democratic presidential candidates support equality in pay for women through the Paycheck Fairness Act. But the big difference is that Bernie Sanders says on his website, “And, not only are we going to expand policies that advance gender equality, we are going to fight to pass the long-overdue Equal Rights Amendment and vigorously defend the critical laws and programs which protect all working people in our country.” Hillary’s website makes no mention of the ERA.

The 14th amendment abolished slavery and included an equal protection clause; the 19th gave women the right to vote. We can vote, and we have legal protection, but what we need now is to finally ratify the amendment, guaranteeing equality for future generations. Women need this protection to keep the significant advances made by women before us, and to lead other women around the world by example.

The fact that women are not guaranteed equal rights in this country contributes to the ongoing debates about fair wages, family leave, affordable childcare, violence against women, social security benefits, and health and reproductive rights. With the recent decision by the Supreme Court to finally sanctify equality in marriage, without discrimination based on sexual preference, where does that leave women on the road to attaining equal rights? It seems we have skipped a step on the climb to the platform that is equality in America.

Would passing of the ERA speed up our chances of earning an equitable and fair wage? Would the threat of repealing Roe v. Wade after 40 years finally leave the political arena once and for all? Would more women join the political conversation? Would women still have to pay “Pink Taxes” for overpriced feminine products; or would true equality translate into consumer dollars saved?

Ted Talks recently hosted long-time friends Jane Fonda and Lily Tomlin to discuss the importance of female friendship. Studies confirm that women with close female friends live longer, healthier lives. They also talked about the power of women as the consumer majority and their personal passion to ratify the ERA. They were both funny and inspiring.

Alice Paul, Gloria Steinem, Sec. Madeleine Albright; these are the names of feminists who have shaped our lives. If it weren’t for women like these, we wouldn’t be able to vote, abortion would be illegal, and the term “feminist” would still be a disparaging label.

Planned Parenthood recently won an astonishing victory; astonishing because the bad guys lost. With the steam from the feminists before us, and with revolutionary victories like this one, we can make a real difference for our future. The time is now. Here at Alice, we say, “Let’s get ‘er done.” We need an amendment; something tangible, something we can all rally behind. It is time for a new generation of women to join together with the grand ole broads and finish this once and for all.

“The planet needs women. The Constitution needs women now. We are not even in the Constitution,” said Lily Tomlin. She went on to say that Justice Ginsberg said any constitution written since World War II has had a provision that gives women equal stature, but ours does not.

Why has the act of ratifying the ERA been put on the back burner? Surely we can find a crack team of female lawyers, researchers, mediums— whatever it’ll take— to get this deed done. Because the last time we checked in with middle class American women, we are doing the work, so we should be equally recognized and acknowledged for our contribution to this society.

Recently, Hollywood actresses such as Patricia Arquette and Jennifer Lawrence cried foul for not being paid the same as their male counterparts, and even in such a ‘progressive industry’ this is still the norm. Late night TV host, Samantha Bee, just debuted on TBS with her show Full Frontal. When asked about the decision to host this show, she said she felt the desire in a physical way, as part of her inner essence, in her ‘swamp.’

The way Alice sees it, we cannot sit back and wait for the politicians to bring us equality. We must rally ourselves; pick up the baton and continue the cause of all the women before us. The path to change is well worn, so we know the direction we need to take. Step one: contact your representatives; let’s get this party started. This is the time to amend our Constitution. We need something we can all point to as we teach our daughters and granddaughters to treat everyone with equality and respect. Let’s do it from our swamps, do it with humor, and make a change that will greatly benefit all of us.