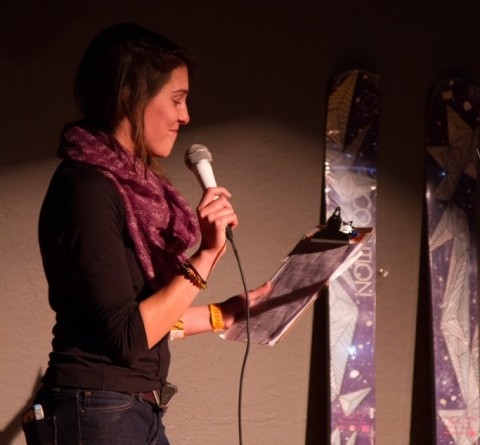 The idea struck me like a bolt of lightning. I was standing on bow watch on a 125-foot sailboat in the middle of the Pacific Ocean. It had been nearly two hours since I was supposed to be relieved, but at three in the morning, you can’t blame anyone for losing track of time. I love standing watch; you are so alone with a wild expanse of ocean reaching out, begging you to go deeper. It is there that I can feel my salty hair, the dry, cracked corners of my mouth and that aching desire to do more, to get off this boat and to still sail forever. When I was on bow watch that night, I realized that this was my cage of creativity, the most fertile birthplace for ideas that originated from your soul to take flight. And that is when it hit me.

My dear friend and mentor had always told me that I would experience a divine calling, when I was the most lost and the most ready. It is important to know that I was raised Buddhist, have never touched a bible and was at a point in my life where the only “divine calling” that I was interested in receiving was a phone call from Orlando Bloom asking me to accompany him to the Oscars. At this time, I was doing everything that I could to get out of college; all I wanted to do was quench my thirst for adventure. I had found Sea Education Association (SEA), a sailing-based program that grants a semester worth of college credits, and immediately jumped on the opportunity. I was also freshly eighteen and nearly bursting from my new found independence and lust for life. When my purpose fell out of the sky and exploded at my feet, I knew that my path had been solidified.

I started No Man’s Land Film Festival: an all-female adventure film festival in March of 2014. I had spent the previous two years collecting content. When I first announced in 2012 that I would start a festival that catered solely to females in the adventure and outdoor industry, not only was I met with resistance, but with contempt. No one could understand why women in sports needed a voice. The general consensus was that women are not as talented as men and that this film festival would result in a celebration of mediocrity and untamed emotion. Everyone that I spoke with openly lectured me on how there was not enough content out there to create a one-hour program and that I should pursue something more practical and lucrative. I remember one person commenting that the best thing that this film festival would do is create a place where guys can pick up girls. These sentiments left me stubbornly determined to prove the world wrong. I knew that if I dug deep enough and committed myself to the search, I would emerge with a powerful product.

In September 2015 I launched the premiere No Man’s Land Film Festival event. The venue was small, holding barely 250 people. I over-bought beer, provided cheap food and stacked the raffle with awesome prizes. I was terrified that no one would come and that everyone else was right. Now if you know me, you will know that it is very hard for me to admit when I am wrong. The doors opened at 5pm and by 6:30 the room was filled with men and women chatting and laughing, flooding the room with noise. When I took the stage, I knew that I had done it.

However, knowing that this contested idea had become a success did nothing for my stage presence, nor my ability to tactfully articulate how amazing this culmination of years of hard work truly was to me. Instead, I stuttered, announced that my husband “likes girls,” and caused a riot when I announced that raffle tickets were hidden underneath the seats. Nonetheless, this event sold out and was the ultimate confirmation that what I had experienced had in fact been a divine calling.

Since that event, No Man’s Land has toured to Aspen and Ouray, CO, Bishop, CA, and has future dates set in Boulder, CO, Bishop, CA, Bellingham, WA, Boston, MA, a conference in Switzerland and much more in the works! My articulation on stage has yet to improve. I opened in Bishop, with “fuck, fuck, fuck.” I am pretty sure that I get on stage and totally black out. Anyway, No Man’s Land has continued to grow beyond my wildest dreams. People have heard of the festival and are eager to bring it to their hometowns.

The ladies featured in these films in no way represent a culture of mediocrity or irrational emotions. These women paint a picture of the present and future of women in the outdoor and adventure sports industry. The US women’s soccer team is finally speaking out about differences in pay grades between their male counterparts. One of the best female boulderers in the world is a prepubescent grade-school girl. Women now must register for the draft. Women in sports are beginning to receive the coverage, respect, equity and appreciation that they deserve.

As No Man’s Land continues to grow, it will continue to be a part of this movement. Females have made up over 50% of the planet’s population for, well, ever. This film festival invites men and women to celebrate the sports, places and people we love through a uniquely feminine lens. As we grow, I can only hope that I too begin to blossom into the best spokesperson for the women who are not heard and for those that are too busy pursuing their passions. Although this festival began as a means to celebrate women in sports and adventure, we stand upon the centuries of perseverance and fight that have made it possible for women around the globe to take on their own adventures. While this is a niche market, I believe that experiencing women in one arena as deserving equals, will inspire the naysayers to see women as equals in every realm of existence. As we grow, I hope that we can foster a sense of respect and equality in every being and for women and girls everywhere. Personally, I have never been more grateful than to have been struck by lightning.

Aisha Weinhold is the founder of No Man’s Land Film Festival, an all-female adventure film festival based in the Rocky Mountains.

3 thoughts on “When Lightning Strikes”