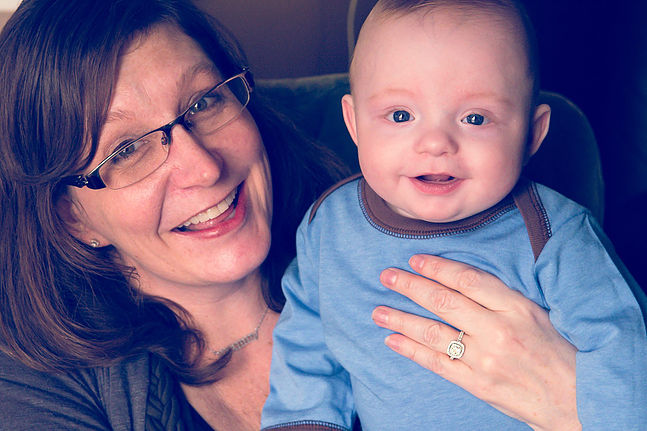 There was a time whenever I drove my car that I found the perfect driving music — usually old school rap, that may or may not have included N.W.A. and 2 Live Crew. I would turn it up so loud that the bass vibrated through my bones and warmed my heart. When I was pregnant and Will was in utero, he always seemed to kick with the beat. Then Sept. 15th happened.

Now, my car rides harbor more on the safe-and-clean, versus dirty-booming-system side.

On that sunny Tuesday afternoon, I drove my sweet, new baby— named Will for his preemie fighting spirit— home from the hospital. This wasn’t the normal drive home a few days after a baby is born. With an emergency delivery full of surprises, Will was welcomed into the world nearly two months prior to his due date.

He was born at almost 31 weeks, just 10 days after I was placed on hospital bed rest.

Up until about 29 weeks, my pregnancy had gone as smoothly as ’80s slow jam lyrics by Babyface. Baby A, his nickname at the time, was doing fine in my incubator — I had even found out I was having a boy after a tearful ultrasound at 21 weeks that fueled my need to know. I had wanted to wait for my due date on Sept. 22, but once I saw his beautiful profile, cute curled up legs, and beating heart on the monitor, my curiosity got the best of me. We were having a boy.

And I couldn’t have been more over the moon about it.

The afternoon my water broke, or what was more like a slow leak, I had just heard from the doctor. I passed the second round of my glucose tests, a process that made me nauseous and caused projectile vomiting that I had not experienced in my pregnancy like some moms-to-be do. I was about to take a nap in my robe with my puppy Sweetie when I noticed a little fluid on the bed sheet. I stood up and didn’t notice anything additional, so took a quick shower to rinse off. When I stepped out of the shower I saw a clear trickle making its way to my right ankle. I immediately called my best friend Megan, a nurse. I happened to catch her on the way home from work and thankfully she answered that day.

“Am I supposed to be leaking fluid?” I asked, with nerves in my voice.

She was quick to say, “No, I would call the doctor. And, if they don’t answer, call again.” The office was 15 minutes from closing, so I called fast. The fluid level started to slowly increase, and the receptionist said to head to the emergency room. Our ride was just beginning.

At the hospital, my doctor and nurses acted swiftly. They determined I had a tear in my placenta, a condition called Preterm Premature Rupture of Membranes (PROM), which occurs in only 2% of all pregnancies. Thankfully my cervix was closed and I was not dilated, meaning I was not going into labor. A magnesium drip was quickly ordered to help protect the baby’s brain and I was given two steroid shots in my thighs to boost lung development.

I wanted to scream like a baby, but it was a little early for that.

The hospital is not equipped with a Neonatal Intensive Care Unit (NICU) so plans were made for me to be transported to a nationally ranked women’s hospital in Indianapolis, about an hour away. A Lifeline helicopter was considered, but our stable condition deemed that unnecessary and the ambulance crew started preparing to transport me by interstate. I was nervous but calm. I had never been in an ambulance. I had an all-female crew that included a neonatal nurse.

I felt the strength of women all around me.

Once at the hospital, I was examined and began to settle in to five weeks of ordered bed rest. No leaving. No driving. No sleeping in my bed. No working on the unfinished baby’s room. No puppy time. Just rest and relaxation.

And, continue to grow a baby inside me.

Since we were scheduled to be traveling to Colorado for a wedding that week, my fiancée, Steve, had vacation time off when my bed rest started so he was able to stay by my side and co-sleep in the room. There was a lot of adult coloring and reading; visiting with friends and family; watching TV and videos about bringing a new baby home and not shaking him.

We finally chose a name for the baby on the way— Will came to me in a vision and just felt right. Then, 10 days later, I went into labor. I was headed down the road to motherhood. Fast. Really fast.

I definitely remember the doctor saying, “I see a foot!”

I vaguely responded, “No, no, no that’s not supposed to happen yet.” Will was breech and only 30 weeks, so an emergency C-section was in order. I had a spinal, lost all feeling in my nether region, and before I knew it the doc was holding up Will for us to see before whisking him off to the pre-NICU receiving room, then to the NICU. He was three pounds, two ounces and all arms and legs.

I cried because he was perfect.

Then I held Steve’s and the anesthesiologist’s hands as they put my baby-making parts back in place. I think it hurt more than I expected. Now, I can’t even remember the pain. In motherhood, all pain is relative— which is weird and hard to explain. But, true.

The most difficult part of our journey was yet to come.

Nine weeks in the NICU where Will needed to grow were ahead of us. He thrived from the start, steadily gaining weight and breathing on his own. We had important skin-to-skin time and started breastfeeding. He smiled when he had gas. The closer we came to 40 weeks, the more milestones Will reached. We waited for him to mature so his sleep apnea and reflux would subside. At 39 weeks, we were there, and headed home.

Without the old school rap so loud I could feel it.

We had the quietest ride I’ve ever had in a car. Following behind Steve’s truck, I drove like I did in Driver’s Ed. I would have passed with flying colors. My hands were at 10 and 2. I checked all my mirrors before taking off. I took the deepest breath I’ve ever had. And kept the radio off and all eyes on the road as the soft sound of his movement in his car seat vibrated through my bones.

And warmed my heart.

Since having her first-and-only baby, April E. Clark has worn her maternity jeans longer than standard issue usually allows. She is a humor newspaper columnist, feature writer and parenting blogger who grew up in the Midwest and lived in the Rocky Mountains for more than 12 years. April is an alumna of Purdue University and the Poynter Institute, and has been a stand-up comic appearing at Comedy Works in Denver, the Wheeler Opera House in Aspen, and Crackers in Indianapolis. These days she is finding humor in dirty diapers and a laughing baby who is growing like a weed.

One thought on “Bringing Baby Home”